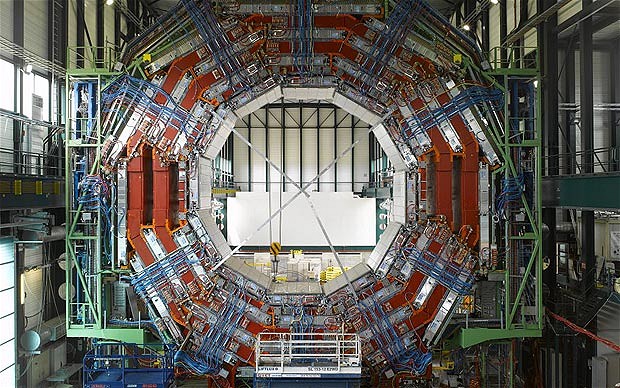 Large Hadron Collider at CERN: Einstein 'was right all along

Physicists operating the Large Hadron Collider at the CERN laboratory near Geneva may have to rethink their claim that particles can travel faster than the speed of light after a source suggested that a bad connection affected the measurements.

They shocked the scientific world by claiming to have disproved Albert Einstein's theory of special relativity.

But a report in the Science Insider journal claims that "a bad connection between a GPS unit and a computer" may have affected the reading.

Einstein's theory of special relativity, proposed in 1905, states that nothing in the universe can travel faster than the speed of light in a vacuum.

But researchers at the CERN lab near Geneva claimed they had recorded neutrinos, a type of tiny particle, travelling faster than the barrier of 186,282 miles per second.

Scientists at CERN claimed that neutrinos arrived 60 nanoseconds earlier than the 2.3 milliseconds taken by light.

The report in Science Insider said the "60 nanoseconds discrepancy appears to come from a bad connection between a fiber optic cable that connects to the GPS receiver used to correct the timing of the neutrinos' flight and an electronic card in a computer. "

"After tightening the connection and then measuring the time it takes data to travel the length of the fiber, researchers found that the data arrive 60 nanoseconds earlier than assumed," it added.

"Since this time is subtracted from the overall time of flight, it appears to explain the early arrival of the neutrinos. New data, however, will be needed to confirm this hypothesis."

A spokesman for the researchers, said: "We have high confidence in our results. We have checked and rechecked for anything that could have distorted our measurements but we found nothing."