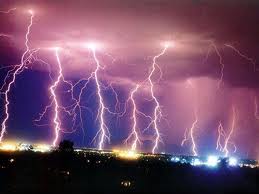 If you count the seconds from the flash of lightning until you hear thunder, then take that number and divide by 3 = storm distance away in kilometres.

The survivable limit is 27,000 volts for a large heart.

Only 10% strikes are fatal, most injuries are caused by the extreme heat.

The temperature of a lightning bolt is 5 times hotter than the surface of the Sun!

Around the Earth there are about 100 lightning strikes per second.

The fastest speed a falling raindrop can hit you is about 30 kilometres per hour.

Keep away from water and open spaces during a thunderstorm!