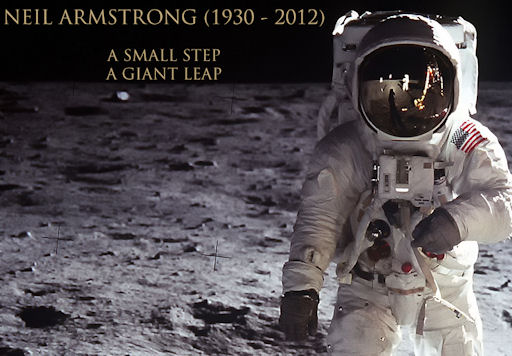 "Neil was among the greatest of American heroes - not just of his time, but of all time," said President Obama in a statement on Armstrong's passing. "Today, Neil's spirit of discovery lives on in all the men and women who have devoted their lives to exploring the unknown. That legacy will endure - sparked by a man who taught us the enormous power of one small step."

Apollo 11 astronaut Buzz Aldrin, who was with Armstrong on the Moon, had this to say: "I am very saddened to learn of the passing of Neil Armstrong. Whenever I look at the moon it reminds me of the moment over four decades ago when I realized that even though we were farther away from earth than two humans had ever been, we were not alone. Virtually the entire world took that memorable journey with us. I know I am joined by millions of others in mourning the passing of a true American hero and the best pilot I ever knew. I had truly hoped that in 2019, we would be standing together along with our colleague Mike Collins to commemorate the 50th Anniversary of our moon landing. Regrettably, this is not to be. Neil will most certainly be there with us in spirit."

Perseid meteor shower to reach peak over Britain - 90 per hour !! 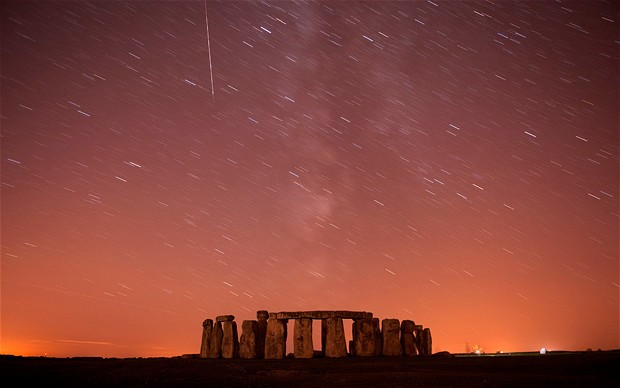 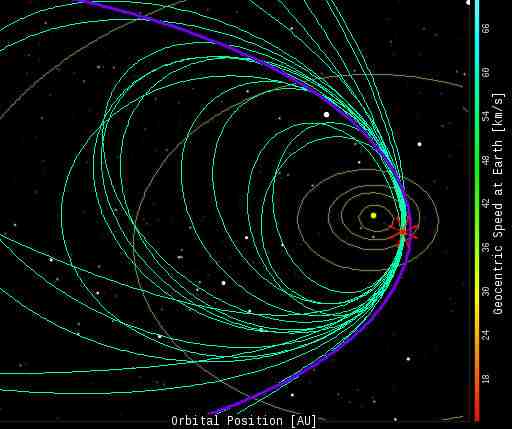 Aug 2012...Up to two meteors will be visible every minute over the British countryside on Saturday night as the annual Perseid display reaches its peak.

As many as 90 meteors could be visible each hour from areas unspoiled by light pollution Photo: REUTERS

The meteors, which appear when particles of space dust collide with our atmosphere, will be visible as bright streaks across the night sky eminating from the Perseus constellation to the north.

The Perseid shower, which happens each August, began on Wednesday night but will reach its most active period on Saturday with thousands of meteors expected to be seen over the coming evenings.

After midnight, as the planet turns towards the stream of dust left by the Swift-Tuttle comet, as many as 90 meteors could be visible each hour from areas unspoiled by light pollution.

Younger readers should also be able to spot meteors after dark at an earlier stage of the night, but they will only pass by about half as regularly as in the early hours.

Sky at Night magazine advises readers to find a site away from streetlights - preferably in the countryside where the sky is darker - and avoid facing the moon.

After allowing 20 minutes for your eyes to adjust to the dark, the best place to look is 20 to 40 degrees away from their apparent source in the Perseus constellation, a Y-shaped collection of stars in the northern sky.

Although the meteors will seem to be bursting away from Perseus at different angles, they actually run parallel to one another along the path of their parent comet, Swift-Tuttle. 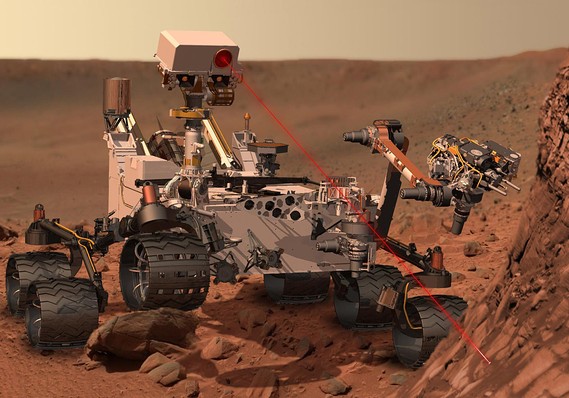 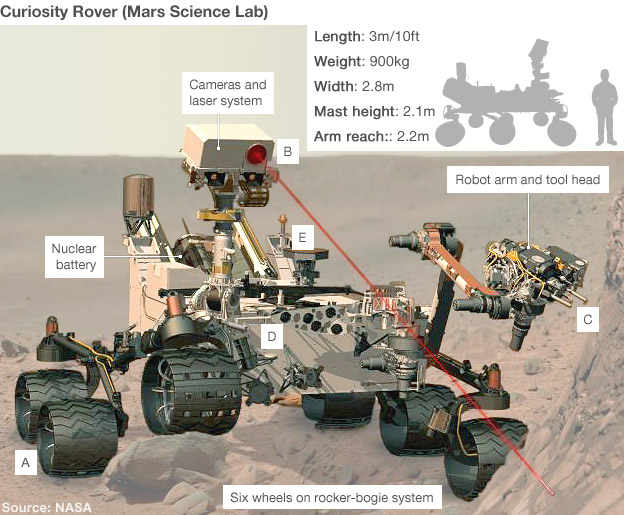 The one ton rover was set to landed on Mars on 6th August -  NASA officials refer to the "seven minutes of terror" of landing the craft. Curiosity is the most scientifically equipped probe ever sent to another planet.

When the robot rover touches down, it will begin an intensive search for signs that Mars may have once hosted life.

The $2.5 billion mission was being hailed as possibly the biggest, boldest extraterrestrial landing for NASA since Apollo 11 touched down on the moon in 1969, CNet reported Sunday.

The descent through the atmosphere after a 570-million-km journey from Earth had been billed as the "seven minutes of terror" - the time it would take to complete a series of high-risk manoeuvres that would slow the rover from an entry speed of 20,000km/h to allow its wheels to set down softly.

The process will be controlled by on-board computers, with no live control from the ground, since it takes radio signals 14 minutes to reach the Earth from Mars.

"When we first get word  that we've touched the top of the atmosphere, the vehicle has been alive or dead on the surface for at least seven minutes," Adam Steltzner, lead mechanical engineer, said in a NASA video about the landing.

NASA said the landing of the one-ton rover marks the beginning of a two-year prime mission to investigate "one of the most intriguing places on Mars." The Rover blasted off on an Atlas-V rocket in November and took about eight months to reach Mars.

The rover will land near the Martian equator, where it will deploy its exploration equipment.  The rover's arm extends about seven feet from the main vehicle to grab rocks and dust for closer study.

The nuclear-powered rover's head mast rises to nearly seven feet above the surface with a camera for stereo color viewing. The mast also holds a laser that can vaporize a speck of material on rocks up to 23 feet away to determine their elements.

The focal point of the Martian mission on Earth will be NASA's Jet Propulsion Laboratory in Pasadena, Calif. 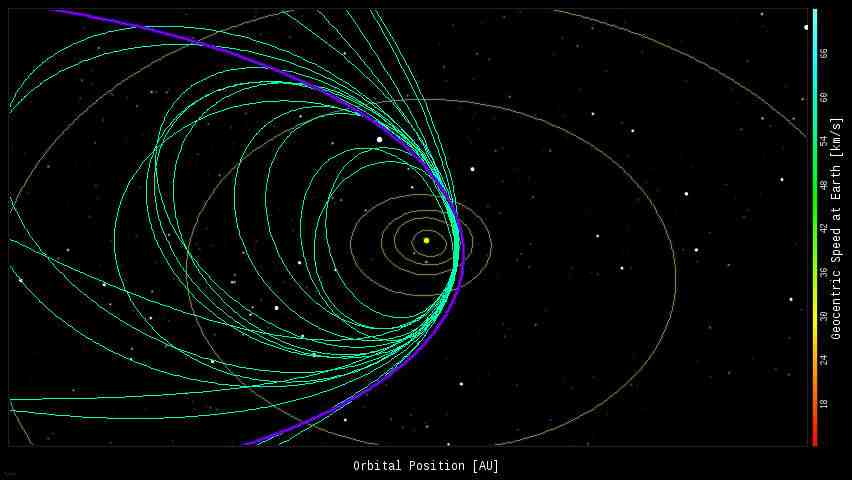 Earth is entering a broad stream of debris from Comet Swift-Tuttle, source of the annual Perseid meteor shower. Meteoroids in the outskirts of the stream are now hitting Earth's atmosphere, producing as many as 10-15 meteors per hour according to worldwide counts from the International Meteor

Organization. NASA's network of all-sky meteor cameras captured 17 Perseid fireballs on the nights of July 28th through 30th. Here are their orbitsThe position of Earth is denoted by the red starburst; all of the meteoroid orbits intersect at that point. The purple line
traces the orbit of the parent Comet Swift-Tuttle. Fortunately, the comet itself does not intersect Earth.

In the days ahead, Earth will plunge deeper into the meteoroid stream, and meteor rates will increase accordingly. Forecasters
expect the shower to peak on August 12-13 with as many as 100+ meteors per hour
visible from dark-sky sites. Monitor the realtime meteor gallery for sightings. 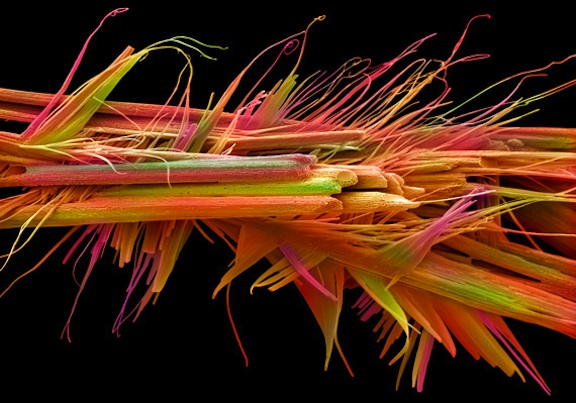 Caffeine acts as a metabolic stimulant on the central nervous system, reducing physical fatigue and drowsiness.

Less than an hour after consumption, caffeine is reported to improve the flow of thought and increase focus and body coordination.

However, the amount of caffeine required to produce these effects depends on a person's body size and degree of tolerance.

Caffeine is a bitter, crystalline xanthine alkaloid that acts as a stimulant drug. In plants, caffeine functions as a defence mechanism.

Found in varying quantities in the seeds, leaves and fruit of some plants, caffeine acts as a natural pesticide that paralyses and kills certain insects feeding on the plant.

The main crystals of caffeine were 400-500 microns long; however, this crystal group formed on the end of the larger crystal and measures around 40 microns in length

by ANNIE CAVANAGH AND DAVID MCCARTHY

Ring of Fire...Amazing map of 203,186 quakes - a century of earthquakes mapped 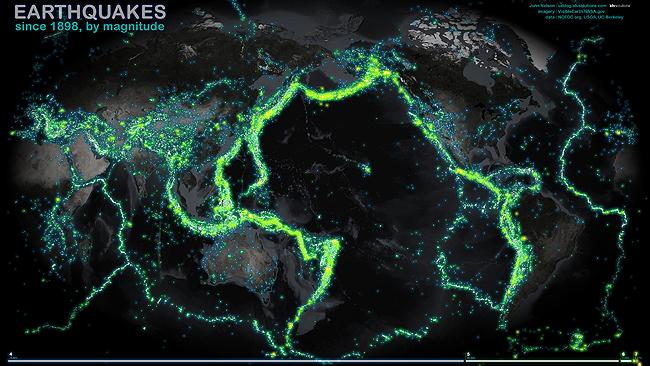 Amazing visualisation: showing earthquakes since 1898, by magnitude, the map pinpoints the Ring of Fire in vivid green.

AN AMAZING map plotting every earthquake of magnitude 4.0 or above in more than a century dramatically visualises the Ring of Fire and other quake hotspots.

In vibrant fluoro green, the map pinpoints the dynamic contact points where continental tectonic plates grind underneath each other, raising mountain ranges and causing the biggest earthquakes on the planet.

Fiery neighbours: Australia is seismically quiet compared to Indonesia, Papua New Guinea and New Zealand. Our biggest recorded earthquake was a 7.2 magnitude tremble at Meeberrie in 1941, that caused severe shaking at its epicentre, and minor damage in Perth, 500km away.

Also clearly visible are the spots where mid-ocean plates are moving away from each other, particularly in the Atlantic and Indian Ocean.

According to the map, Australia is one of the most geologically stable countries on Earth.

The map was created by designer John Nelson of IDVSolutions, a US software company that visualises data.

It merges data from America's Advanced National Seismic System and the United States Geological Survey with a map of the world centred on the Pacific Ocean. 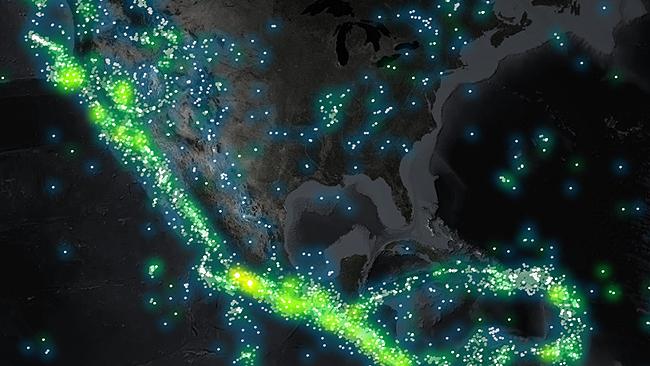 Waiting for The Big One: San Francisco and Los Angeles sit on California's San Andreas fault, the tectonic boundary between the Pacific and North American plates.

The 7.9 magnitude 1906 quake killed more than 3000 people in San Francisco. A 9.2 earthquake and resulting tsunami in Alaska in 1964 killed 143. Central America is one of the most seismologically active regions on Earth.

Danger zone: the map reveals that Japan is one of the most seismically active spots on Earth.

In March 2011, a massive magnitude 9.0 earthquake hit Japan, causing a huge tsunami than killed an estimated 15,800 people. It was the biggest quake recorded.

Earthquake aftermath: a Japanese girl searches through the debris as a ship sits atop a building after the March 2011 earthquake and tsunami, which devastated the country's east coast. (AP Photo/Yomiuri Shimbun, Yasuhiro Takami) 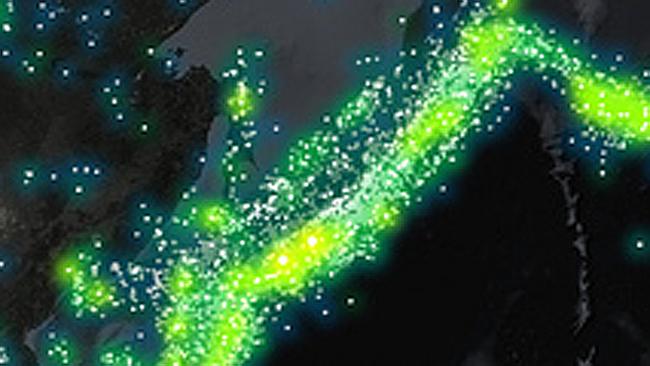 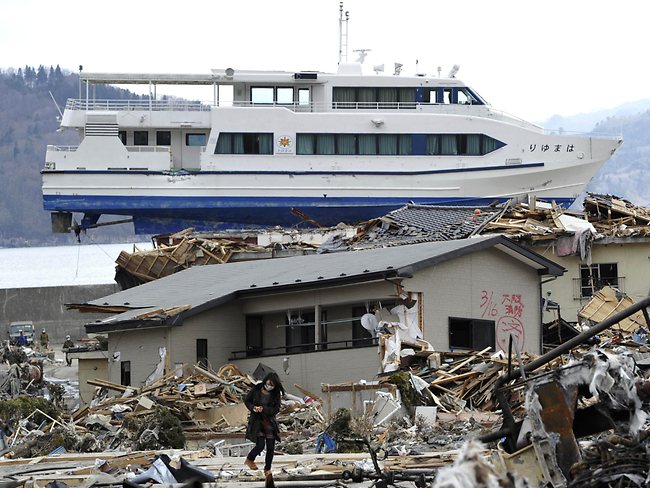 Nelson points out that agencies only started properly recording "hard core" earthquakes in the 1960s. 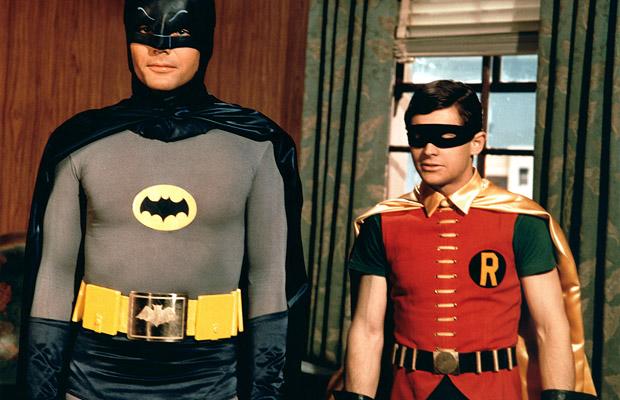 If Batman jumped from a building 492ft (150m) high, the team discovered, he could glide a distance of around 1148ft (350 metres). But his velocity would increase to about 68 mph as he descended before reaching a steady 50 mph as he
approached street level - a speed too great for him to survive without serious injury. In fact, the caped crusader would be travelling so fast that he'd crash and would probably die.

The group of four students concluded that DC Comics' superhero, who returns to cinemas on July 20 in the
Dark Knight Rises, should consider taking a parachute for a safe landing.

Batman could fly using just his cape but would suffer serious injuries when trying to land, a study of the
aerodynamics of his winged attire has concluded.

The claim, which will bring any young comic fans down to Earth with a bump, was made by student physicists
at the University of Leicester.

They wanted to see whether the 15ft wingspan of Batman's special rigid cape - about half that of some hang
gliders - would be enough to keep him airborne over Gotham City.

Their paper, called 'Trajectory of a Falling Batman' was published in the University of Leicester
Journal of Special Physics Topics.

In a mathematical simulation of his flight, they wrote: "Batman's descent is rapid, even for this high
estimate for the lift coefficient. Looking at the case for gliding from a
fairly tall building of height 150m, Batman can glide to a distance of about
350m, which is reasonable; the problem with the glide lies in his velocity as
he reaches ground level.

"The velocity rises rapidly to a maximum of a little over 110km/hr before steadying to a constant
speed of around 80km/hr. At these high speeds any impact would likely be fatal
if not severely damaging (consider impact with a car travelling at these speeds).

"Clearly gliding using a batcape is not a safe way to travel, unless a method to rapidly slow down is
used such as a parachute."

One of the team, David Marshall, 22, said: "If Batman wanted to survive the flight, he would
definitely need a bigger cape. Or if he preferred to keep his style intact he
could opt for using active propulsion, such as jets to keep himself
aloft."