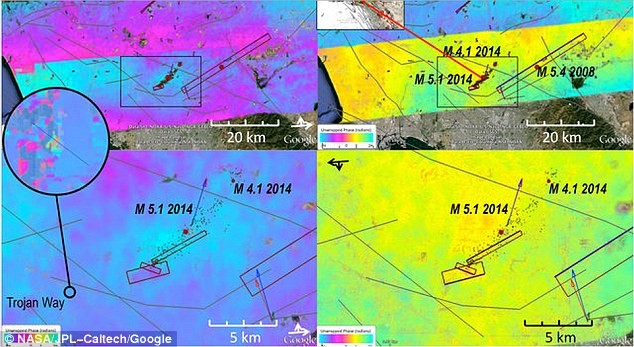 Nasa warns Los Angeles there is a 99.9% chance of a 5.0 earthquake in the next 3 years Los Angeles warned to brace for a 'big one':

The space agency says it is 99.9 per cent sure that LA will be hit by a 5.0 magnitude earthquake in the next three years. 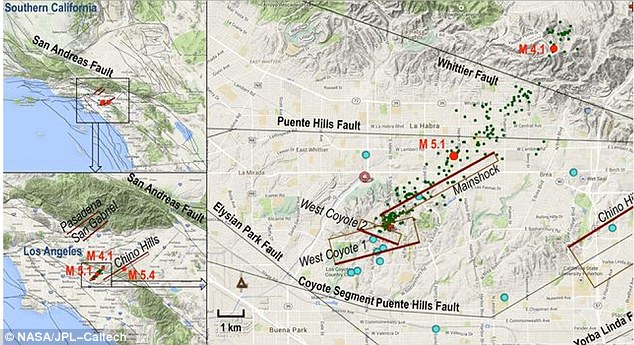 It's basing its prediction on a study of the La Habra earthquake that shook Greater Los Angeles last year.

But in a rare public disagreement, the US Geological Survey (USGS) has said Nasa's analysis is wrong, and there's only 85 per cent chance this could happen.

While the earthquake was relatively moderate in size, the earthquake's depth, at 3.6 miles (5.85km), combined with its location caused more than $12 million in damage.

A new report in April from the U.S. Geological Survey warned the risk of 'the big one' hitting California has increased dramatically.

Researchers analysed the latest data from the state's complex system of active geological faults, as well as new methods for translating these data into earthquake likelihoods.

The estimate for the likelihood that California will experience a magnitude 8 or larger earthquake in the next 30 years has increased from about 4.7 per cent to about 7.0 per cent, they say.

'We are fortunate that seismic activity in California has been relatively low over the past century,' said Tom Jordan, Director of the Southern California Earthquake Center and a co-author of the study.

'But we know that tectonic forces are continually tightening the springs of the San Andreas fault system, making big quakes inevitable.

Most of the damage occurred within a 3.7-mile (6km) radius of the epicentre of La Habra, with a substantial amount of damage south of the main rupture.

The team's results show that even moderate earthquakes near Los Angeles can produce ground deformation and damage to water mains away from their epicenters.

These included; the West Coyote Hills in northern Orange County; in the Chino Hills on the border of Orange, Los Angeles and San Bernardino Counties; and in the San Gabriel Valley.

It is likely the deeper portions of these faults remain locked and are capable of producing future earthquakes.

'The earthquake faults in this region are part of a system of faults,' said Donnellan.

'They can move together in an earthquake and produce measurable surface deformation, even during moderate magnitude earthquakes.

'This fault system accommodates the ongoing shortening of Earth's crust in the northern Los Angeles region.'

Donnellan said a future earthquake to release the accumulated strain on these faults could occur on any one or several of these structures, which may not have been mapped at the surface.