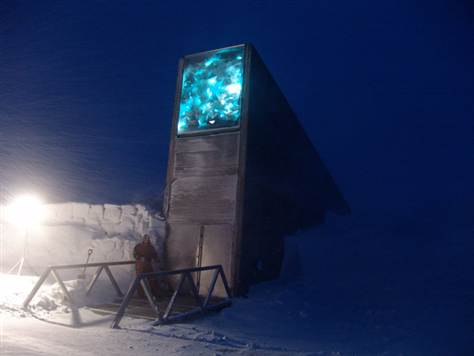 This week, the Doomsday Seed Vault in Norway is scheduled to receive nearly 25,000 samples of seeds from around the world, including those of grains that grow on one of the world's highest mountain ranges and a plant whose stems redden an Ecuadorean drink on the "Day of the Dead."

With these additions the now four-year-old vault, formerly known as the Svaldbard Global Seed Vault, would house more than 740,000 samples in an Arctic mountain on the Svaldbard archipelago.

"Our crop diversity is constantly under threat, from dramatic dangers such as fires, political unrest, war and tornadoes, as well as the mundane, such as failing refrigeration systems and budget cuts. But these seeds are the future of our food supply, as they carry genetic treasure such as heat resistance, drought tolerance or disease and pest resistance," Cary Fowler, executive director of the Global Crop Diversity Trust, one of the entities responsible for the vault, said in a news release. [ Top 10 Ways to Destroy Earth ]

The vault is intended to act as a backup for living crop collections around the world; a fire in January destroyed unique varieties of bananas, yams, sweet potatoes and taro being duplicated at the National Plant Genetic Resources Laboratory in the Philippines, according to the trust.

The new samples arriving for the vault's birthday, include:

Grains from Tajikistan's Pamir Mountains, including wheat that grows across a wide range of elevations, in hot summers, and harsh, snowy winters. Diversity like this is important now because scientists are looking to develop a strain of wheat that is resistant to wheat stem rust, a fungal disease.A variety of wheat, known as Norin-10, which is the source of genes that have given modern wheat plants strong, short stems capable of supporting more grain, contributed by the U.S. Department of Agriculture's Agricultural Research Service.Amaranth collected from a family farm in Ecuador in 1979. Amaranth seeds once provided grain to the Aztecs and Incas, and its stems still supply red pigment for "colada morada," a traditional South American beverage used in Ecuador's "Day of the Dead" celebration.Several subspecies of barley imported to the U.S. from Poland, and grown in the Pacific Northwest; these subspecies gave rise to modern varieties, including one malting barley called "Klages" that is popular among craft beer brewers.

The vault, which officially opened on Feb. 26, 2008, is dug into the Platåberget mountain ("plateau mountain") located near the village of Longyearbyen, Svalbard —  a group of islands north of mainland Norway.

The arctic permafrost offers natural freezing for the seeds, while additional cooling brings the temperatures down to minus 0.4 degrees Fahrenheit (minus 18 degrees Celsius). It has the capacity to hold 4.5 million seed samples — and since each sample contains about 500 seeds, a maximum of 2.25 billion seeds would fit into the vault.