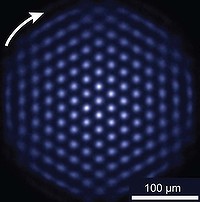 Quantum Super computer "The system we have developed has the potential to perform calculations that would require a supercomputer larger than the size of the known universe. And it does it all in a diameter of less than a millimetre," Dr Biercuk, of the University of Sydney, said.

Its 300 charged beryllium atoms are trapped in suspension by magnetic and electric fields, and their interactions can be controlled by lasers.

Dr Biercuk said the tiny device's role was like that of a scale model of an aircraft wing, which engineers might test in a wind tunnel to try to design a better plane.

"Tremendous insights about complex quantum systems can be gleaned using a quantum scale model," he said.

For example, scientists want to design new materials, such as high-temperature superconductors, whose properties depend on the collective quantum behaviour of billions of atoms.

The traditional approach to design would be to run computer models that mimic how all the particles in a material interact to try to predict its overall properties.

But this is extremely difficult with quantum systems, because particles can behave weirdly at the quantum level, such as being in two distinct states at the same time - a characteristic known as superposition.

The team's quantum simulator was designed to study quantum magnetism, with the outer electrons of the beryllium ions acting as a tiny quantum magnets.

Built by a team led by Joseph Britton of the US National Institute of Standards and Technology, the device has broken the record for the number of interacting elements in a programmable quantum simulator.

The results are published in the journal Nature.