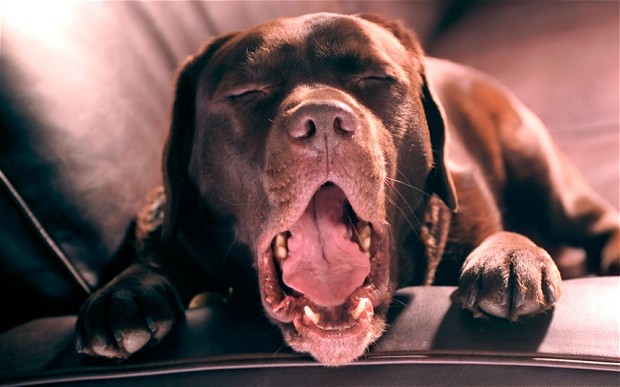 Revealed: why canines yawn after their 'dog tired' owners

Researchers claimed that dogs responded only to an audio cue such as a yawn even if they didn't see the action taking place.

The study found this was particularly noticeable when the dogs were listening to the yawns of people they knew.

Scientists suggested the findings, presented at the National Ethology Congress in Lisbon, showed canines had empathy to human behaviours.

"These results suggest that dogs have the capacity to empathise with humans," said lead author Karine Silva, from the University of Porto, Portugal.

For their study, researchers selected 29 dogs that had lived with their owners for at least six months.

They recorded the owners yawning before playing it back to the pets.

Recordings of the yawn of a stranger and a yawn played backwards.

The dogs sat two sessions a week apart and the number of yawns for each noise was monitored.

But the results also found the dogs were five times more likely to yawn when they heard their owners' voices played back.

Joana Bessa, from Oporto University, who also was involved in the study, said the findings were interesting.

"The dogs yawned more when they heard humans they knew yawning, like their owners, as opposed to people they didn't know, and the possibility that dogs could have some empathy with humans came about," she said.

Miss Bessa, from the university's Abel Salazar Institute of Biomedical Sciences, said the "positive results" concluded that "there was contagion by the dogs".

A previous study by researchers from University of London's Birkbeck College found that dogs mimic yawning nearly three quarters of the time if they saw a human doing it.

But some experts were sceptical about the research, which will be shortly published in the journal Animal Cognition.

Ádám Miklósi, an animal behaviour expert at the Eötvös Loránd University, in Budapest, said previous studies found dogs can look guilty even when they were not.

"Using behaviours as indicators will only show some similarity in behaviour," he said.

"But it will never tell us whether canine empathy, whatever this is, matches human empathy."

In addition, dogs are among the few animals that do yawn while others who show their desire to sleep include chimpanzees baboons and macaques.